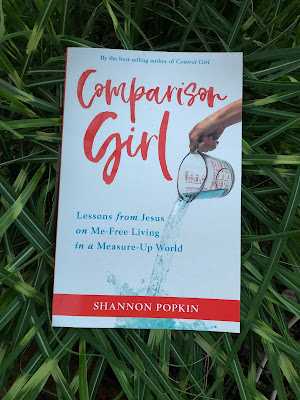 It is so refreshing when an author is willing to share experiences from her own life that display her weaknesses, struggles, mistakes and insecurities--not in a way that makes the book about her, but rather creates an atmosphere that shows her desire to connect with you. Popkin uses biblical truths to expose Satan's lies and solidify who we are in Christ.

The layout of Comparison Girl is a chapter by chapter revealing of truth; stories taken straight from everyday life that are then examined through the eyes of Christ. The reflection and transformation as we let go of the bondage of Satan's lies comes because Scripture remains the sounding board. The personal response questions and For Meditation at the end of each chapter help the book not just be a feel-good read, but a "let's put it into action" resource.

Time to get away from the insecurities and the "keeping up withs" and get back to "Jesus's me-free way of living". And Comparison Girl is designed to help Christian women do just that.

*I received a copy of this book from the publisher, but was under no obligation to write a review. My honest opinion has been provided without any requirement to write a positive review.

Mid March Memories {The Goodness within 2020} 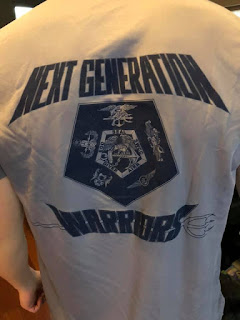 Restaurants are providing free meals for kids. The Food Service in our school district and other districts are making sure every student & younger siblings have access to lunch & breakfast through our closure. Churches are making sure schools are able to still provide weekend meals for their “snack pack” kids.
Churches are providing online Sunday services. Zoos, authors, therapists are hosting FB live events. Homeschool friends being helpful & humble as they post creative teaching ideas & links.
Teachers are working tirelessly to be there for students. My kids’ resource teacher created a private FB group to keep connected with us. The principal read the kids a book. Emails from our speech pathologists, convo with the social worker. Medication from the nurse. Separate details from the principal & the classroom teachers. My high schoolers getting kind and encouraging emails from their teachers.
Politicians at state and national level who essentially have nothing in common—until it comes to keeping us all as safe as possible and doing what they can to lessen the catastrophe.
I was two months pregnant with Connor on 9/11, and watched the reshaping of our nation throughout my pregnancy. Now a senior, the landscape of Connor’s exiting childhood is as dramatic a change as his entry into it was. After high school? He swears in and joins the Navy; Special Ops. Never has life felt as full circle as looking at my life via his childhood.
Through it all, even in the midst of the storm, what I’m seeing is God’s GOODNESS. And I am beyond thankful.
Posted by LeAnne at Thursday, April 09, 2020 No comments:

God is Bigger than our DNA {The Making of my Family}

Mike and I looked at each other and shook our heads. We had no answer.

When our son was five, we took him to the orthodontist for an initial checkup--it was pretty obvious he would have issues when his permanent teeth arrived. "Your son has an exact bite. It's genetic; which one of your families did he get that from?"

Mike and I looked at each other and shook our heads. We had no answer.

When our son was six, I heard his voice from the backseat of the van: "Mom, am I a little person?"

That question was one for which I did have an answer--no. But, I could not explain to that small boy, whose dad is 6'3" and mom 5'6", why he was so short. I couldn't tell him that Mike and I constantly eyeballed him and his younger sister, seeing if she was now the taller child.

Can I tell you something? Having biological children as well as adopted children is the most amazing, wonderful, eye-opening, God-moving, tears-flowing, strength-lacking, mistake-making, redemption-asking, Jesus take the wheel, I'm filled up, I am undone area of my life.

I always knew I'd be a mom; I just knew. Perhaps it's because I'm the oldest of four. Maybe it's because I have an amazing mom who led with authoritative calmness as my dad travel a ton throughout my childhood. Maybe it's because I began babysitting at a young age, or because God gave me a nurturing (bossy?) demeanor. I didn't know how, or when, but I knew.

What I didn't know was the way that God would SHOW UP within every aspect and create such a cool journey. The journey has rocked my world a few times, and it's very safe to say God isn't done working through me as He works within my kids. I try my best to not fear the future, and constantly ask God to give me strength, wisdom, and guidance. Oh, and forgiveness--that's the thing I ask God the most!

God, in His intricate way, did the following with our six children:


For all my kids' similarities and differences, I am SO thankful God has blended it all in such a way that truly makes us one family; a hodgepodge of unique, common, minute details that piece us together in the most perfect way.

And the boy, for whom we didn't have answers in regards to his genetic traits? Well, that part is my favorite, because that boy was Connor. My second-born. The one I can still recall the specific night I became pregnant with him (sorry, bud). The one whose birth is so deeply etched in my mind due to all the events that took place within the Labor & Delivery room, including the nurse who saved the day when she realized Connor was making his appearance RIGHT NOW.

Mike and I still don't have any answers regarding Connor's inherited traits. Honestly, the more I think about it, the more I sometimes wonder: Did God create Connor in such a way that our adopted children would never feel isolated due to traits for which we have no explanation?" As the older brother nearly passed up in size by Kylie, did God make Connor a shorter child so that he and Charlie (who is extremely small for his age) could have a special connection?

Within my biological & adoptive mix of brown-eyed, blue-eyed, kiddos, only one is odd-man out: a 'green-eyed-with-the-slightest-touch-of-golden-hazel' boy.

Connor; the sole kid who has his mama's eyes. Pretty sure God did that on purpose, too. 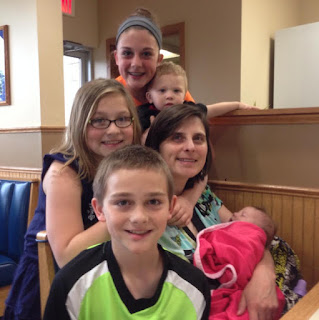 *Brynlee was born exactly 4 months after this picture was taken. #Godknew.
*Kaitlin graduates in 1 week, then starts nursing school. #Godknew.
*Connor is going into the Navy & will do his entrance tests this month. #Godknew.
*Kylie is finishing her freshman year and is still too young for Driver's Ed. No huge 'milestones' for her right now. #PraiseJesus.
*Charlie turns 7 in 18 days & will continue on at his awesome school. #PraiseJesus.
*Kolbie, 5, will start Kindergarten. Without Brynlee. #PrayforMama.
*Brynlee, 4, will continue her fabulous preschool. Without Kolbie. #PrayforMama
I've felt the press of the biggest parenting transitions happening all at once this month. Sending one off to college & kindergarten at the same time? Constant communication with Navy Recruiters and IEP teams? And knowing that my little girls...BFF's like I've never seen before...separate this fall due to their ages. I prayed about holding Kolbie back, or sending to a private school so Brynlee could start now...but it just wasn't God's answer.
This next year will be a time of growth. A time of stretch. A year I suspect I will feel the Refiner's Fire in a way I have not yet experienced. TRUST. RELEASE. PRAY. REPEAT.
Have I ever felt the weight of Mother's Day quite like I am right now? The overwhelming recognition that God created 6 individuals to whom he said, "I have chosen LeAnne as your mom."?
*Three kids from my womb.
*Two kids from another's.
*One kid from another.
All mine, fully, completely, forever & ever. A blessing, just like Christ's death & resurrection, of which I am fully undeserving. My heart is overwhelmed, and I am gratefully broken. #toHIMbetheglory.
Posted by LeAnne at Thursday, February 06, 2020 No comments:

LeAnne
First of all, my husband assures me I can change the name of my blog anytime. So, if I come up with something I believe can encompass who I am and where I'm at in life, I'll change the title. At the same time, I have to realize a few things--I JUST turned 42, have 6 children of my own (3 through adoption) & and since the state limit is 6 kids, just became a 'retired' foster parent. And, I'm still not sure what all God has planned our family. Which means--whether I like it or not--"Mom jeans" are a predominant way to describe my life.